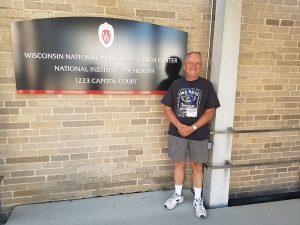 Sander retired on Sept. 26, with his coworkers throwing him a happy retirement party at the center the day before.

After growing up in Cross Plains, Wisconsin, and attending Middleton High School, Sander worked for two years in Madison before being drafted into the Army in 1967. He had married his sweetheart Marion Theis that summer. Three days before his expected deployment to Vietnam, Sander was given the choice to instead mobilize to the U.S. Army Infantry Training Center at Fort Ord on Monterey Bay.

He and Marion headed west together. The following year, it was off to the 16th Combat Aviation Battalion in Stuttgart, Germany. This time, the couple decided that Marion would remain stateside while Les completed his next chapter of military service. Les served in Germany for one year, buying a Volkswagen for $75 so he could drive around and see Europe, then selling it for the same price one year later and heading home to start the next chapter of his life.

That chapter was starting a family and working at the Primate Center. Upon returning home to Wisconsin, Marion’s brother-in-law, Earl Duhr, who was an animal caretaker at the Wisconsin Regional Primate Research Center, suggested that Les look into getting a job there. He started on Dec. 29, 1969, working in the nursery in the main center building, then as a caretaker at the center’s former facility at Henry Vilas Zoo. In 1985, he moved back to the main center building to work in colony records.

Sander recalls enjoying working “with so many wonderful colleagues”: Lenny Acker and Millie Urben at the Zoo; Earl Duhr, Doug Cowley, Laverne Roessler, Leo Johnson, Darv Goldbin, Jack Haskins, Dan Houser and many others at the center. “I enjoyed being outdoors at the zoo, although winter could be tough. I interacted with the public and answered their questions about the Primate Center. More than 90 percent of their comments about the center were positive.”

Sander plans to stay active in local politics through his seat on the Mazomanie Village Board.  He is also active with the American Legion Post in Mazo. He plans to fish and golf more as well. Les and Marion now have two sons and five grandchildren. They celebrated their 50th wedding anniversary this June.

“Les was always a pleasure to work with, always smiling and he always had a quick one-liner to put a positive spin on things,” said Lisa Tomczak, Colony Records.  It will not be the same around here without him, he is a ray of sunshine and the best storyteller I know.”