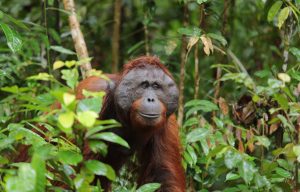 Research at the Wisconsin National Primate Research Center (WNPRC) has brought about major accomplishments in biomedical research, whether it be through advancements in various treatments and therapies, discovering the origins of numerous health conditions, or even taking the first steps toward growing pluripotent stem cells. What many don’t know is that a growing body of research conducted through the center is linked closely to the current state of wild primate populations.

One recent addition to this area is Graham L Banes, Ph.D. Originally from London, England, Banes has joined the WNPRC as an associate scientist. Here, he combines both field and laboratory research to study how human intervention impacts ecosystems and the species that call them home. More specifically, Banes’s research is primarily focused on orang-utans.

Banes has always had a lifelong goal to study orang-utans. “I remember when I was a child growing up in London, asking zookeepers why their orang-utan had cheek pads. And they said, ‘Well, nobody knows.’” Fast forward 20 years, and the topic became the basis of his doctoral thesis at Darwin College, University of Cambridge.

Banes initially spent around eight years conducting field research on wild orang-utans in Central Indonesian Borneo. Through his studies, he found that a subspecies of Bornean orang-utan had been mistakenly reintroduced in the wrong region and had subsequently interbred with the native subspecies. He concluded that this must have also affected the present-day captive population of orang-utans, as they originated from all across the species’ natural range. As a result, Banes transitioned toward working closely with zoos and has shifted his focus from behavioral studies to orang-utan conservation genetics.

Through the multiple studies Banes has conducted over the years on both captive and wild populations of orang-utans, he has addressed topics such as reproduction, interbreeding and, of course, gaining a better understanding of the development and purpose of those large cheek pads that are a defining characteristic of male orang-utans. He has also spent a large amount of time not only applying this research toward developing orang-utan conservation programs, but also to improving the care and management of captive orang-utans in zoos worldwide. 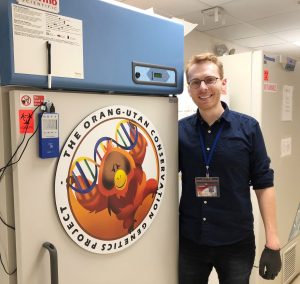 Throughout his studies, Banes has also focused on his long term research program, The Orang-utan Conservation Genetics Project. In doing so, he has unintentionally acquired the largest biomaterials collection in the United States from a critically endangered mammal. The collection is comprised of more than 3,200 DNA samples from wild and captive orang-utans all over the world, each sample designated for specific research projects.

Some of these research projects are happening right here in Madison. Dr. Amita Kapoor, head of the WNPRC Assay Services Unit, is working with Banes to expand on his Ph.D. research by examining how hormones, specifically androgens, change in relation to the development of cheek pads in male orangutans. “This is an exciting collaboration because the urine is coming from zoos that have worked with Graham,” Kapoor said. She explained that her unit will conduct hormone analysis using liquid chromatography with tandem mass spectrometry (LC-MS/MS). “The measurement of a urine androgen panel from male orangutans in relation to their cheek pads is novel.”

Banes’s interest in genetics also has the potential to benefit from existing expertise in Dr. David O’Connor’s WNPRC Genetics Services Unit – widely known as a world leader in the field of macaque genotyping and pathogen sequencing.

Banes’s shift into genetics not only stemmed from his surprising research findings in the field, but from changing views of what research, especially concerning endangered species, should address. “The time to ask only interesting questions is long gone,” he stated. “Now, we’ve got to start thinking, ‘What research can we do that will make a difference, that will save these species from extinction?’”

With all the studies done worldwide using non-human primates, Banes’s research could not be more relevant at a time when the only areas where wild orang-utans live are being wiped away by deforestation. Indonesia and Malaysia are home to three species of orang-utans, all of which are classified as critically endangered; the Bornean orang-utan was changed from endangered to critically endangered in 2016 partly because of Banes’s research in the area. Further work through The Orang-utan Conservation Genetics Project could allow Banes to explore the impact on these natural populations as a result of such human encroachments. It would also allow him to study how these populations are affected by events like reintroduction and translocation, both of which occur commonly as a part of conservation efforts and, as he discovered, sometimes lead to unintended interbreeding between wild populations.

Outside of his own work, Banes has also supported graduate students with their research on other non-human primates, along with a variety of other endangered species, including American badgers, harbor seals and pangolins, the most trafficked mammal in the world. In collaboration with the Chinese government, he has also begun to study the genetics of South China tigers: fewer than 180 individuals exist in zoos; the species is extinct in the wild.

Banes has numerous manuscripts under review in peer-reviewed scientific journals, each detailing his studies of primate genomics at the WNPRC.