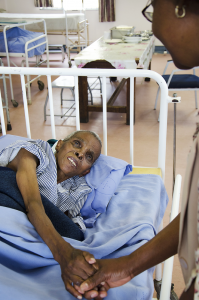 Tuberculosis (TB) is the leading infectious cause of death worldwide. The bacterial infection killed roughly 1.6 million people in 2017, according to the National Institutes of Health. In the past 200 years, TB claimed the lives of more than 1 billion people — more deaths than from malaria, influenza, smallpox, HIV/AIDS, cholera and plague combined.

In AIDS patients, TB is the leading cause of death. Unfortunately, no one knows exactly why TB is such a threat in people with immune systems compromised by HIV. This may change with a new model for studying co-infection with both HIV and the TB bacteria – the Mauritian cynomolgus macaque. The immune systems of these animals are similar to humans and they are susceptible to both SIV (the nonhuman primate version of HIV) and Mycobacterium tuberculosis (the etiologic agent of TB).

The National Institutes of Health announced this week that it is stepping up efforts to fight TB through a new strategic plan. One of the NIH’s priorities is to invest in developing new tools and resources to advance research in knowledge, prevention, diagnosis, and treatment of TB. The plan states, “It is critical to ensure that investigators involved in TB research and product development have access to Biosafety Level 3 (BSL3) facilities, including facilities that have capacity for non-human primate (NHP) research.”

This month, researchers at the University of Pittsburgh and the University of Wisconsin–Madison report in Infection and Immunity how a new nonhuman primate model may help bring scientists closer to understanding the AIDS-TB link.

Scientists do not yet know specifically how HIV impairs host resistance to a subsequent infection with Mycobacterium tuberculosis, according to Mark Rodgers, senior research specialist at the University of Pittsburgh and the study’s lead author. “Our study demonstrated that pre-existing SIV dramatically diminishes the ability to control M. tuberculosis co-infection from the start,” he says.

The researchers used 15 Mauritian cynomolgus macaques in the study. Eight monkeys infected with only M. tuberculosis displayed dichotomous susceptibility to TB: Four animals needed to be humanely euthanized within 13 weeks of M. tuberculosis infection and four animals survived more than 19 weeks following infection. In stark contrast, the paper’s authors report that all seven SIV-positive animals exhibited rapidly progressive TB following co-infection with M. tuberculosis and all had to be humanely euthanized by 13 weeks.

“For the first time, we have a well-characterized nonhuman primate model that will facilitate research into vaccines or therapeutics to battle TB in people living with HIV”, says senior author Charles Scanga, research associate professor of microbiology and molecular genetics at the University of Pittsburgh.

The paper’s authors include Shelby O’Connor, associate professor of pathology and laboratory medicine at UW–Madison and the Wisconsin National Primate Research Center, and additional researchers from both universities and the WNPRC.

The nonhuman primate work was conducted at the University of Pittsburgh in close collaboration with O’Connor and other WNPRC researchers affiliated with the UW–Madison School of Medicine and Public Health and the School of Veterinary Medicine. O’Connor and her team helped identify animals and performed the critical immunology and virology assays. The WNPRC has a subcontract on the University of Pittsburgh grant, which is administered through the National Institutes of Allergy and Infectious Diseases.