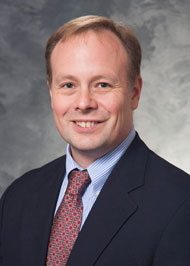 My research program is directed towards understanding host-pathogen interactions for human and simian immunodeficiency viruses. Current areas of investigation include:

Tetherin (BST-2 or CD317) is an interferon-inducible transmembrane protein that interferes with the detachment of enveloped viruses from infected cells. We identified Nef as the viral gene product of SIV that counteracts restriction by tetherin in Old World monkeys, and found that this activity is dependent on a five amino acid sequence that is missing from the cytoplasmic domain of human tetherin (Jia & Serra-Moreno et al. 2009. PLoS Pathog.). The absence of sequences in human tetherin that confer susceptibility to Nef explains why this activity was ultimately acquired by the Vpu and Env proteins of HIV-1 and HIV-2 respectively. We also identified compensatory changes in the cytoplasmic tail of Env that restore resistance to tetherin in a nef-deleted strain of SIV that regained a pathogenic phenotype in rhesus macaques (Serra-Moreno et al. 2011. Cell Host Microbe). This finding is entirely consistent with the adaptation of HIV-2 Env for antagonism of human tetherin, and provides the most direct evidence to date that the ability to counteract restriction by tetherin is important for lentiviral pathogenesis. More recently, we investigated the mechanism of tetherin antagonism by Nef, and found that this activity is dependent on a physical interaction between Nef and tetherin and on clathrin-mediated endocytosis (Serra-Moreno et al. 2013. PLoS Pathog.).

Natural killer (NK) cells recognize and kill infected or malignant cells without prior antigenic stimulation and thus provide an important innate immune defense against infectious agents and tumors. NK cell responses are regulated in part through interactions between highly polymorphic killer cell immunoglobulin-like receptors (KIRs) expressed on NK cells and their MHC class I ligands on target cells. Genetic evidence indicates that KIR and MHC class I polymorphisms play an important role in determining the rate of disease progression in HIV-1 infected individuals. However, the immunological mechanisms underlying these observations are poorly understood. We recently identified an interaction between an inhibitory KIR and a common MHC class I molecule in the rhesus macaque that is modulated by SIV peptides (Colantonio et al. 2011. PLoS Pathog.). One implication of these observations is that viruses may acquire changes in epitopes that increase the binding of MHC class I ligands to inhibitory KIRs as a mechanism of innate immune evasion to prevent the activation of certain NK cell subsets

The role of ADCC in HIV-1 or SIV infection is poorly understood due in part to limitations of methods for measuring this immune response. We therefore developed a novel assay for measuring antibody titers capable of directing ADCC against virus-infected cells (Alpert et al. 2012. J. Virol.). Data obtained with this assay suggest that the time-dependent maturation of protection in macaques inoculated with nef-deleted, live-attenuated SIV is associated with an increase in ADCC titers to the challenge virus (Alpert et al. 2012. PLoS Pathog.). This assay was also selected by the US Military HIV Research Program as one of six primary assays for the immune correlates analysis of the phase III RV144 vaccine trial (or “Thai trial”) to determine if ADCC activity differed for HIV-infected versus uninfected vaccine recipients (Haynes et al. 2012. N. Engl. J. Med.). Current projects are now directed towards understanding the molecular mechanisms of HIV-1 and SIV resistance to ADCC.